This is what my symptoms looked like, more or less:

Let’s take a more detailed look at the virus loads in the 9 COVID-patients studied by Wölfel et al.: 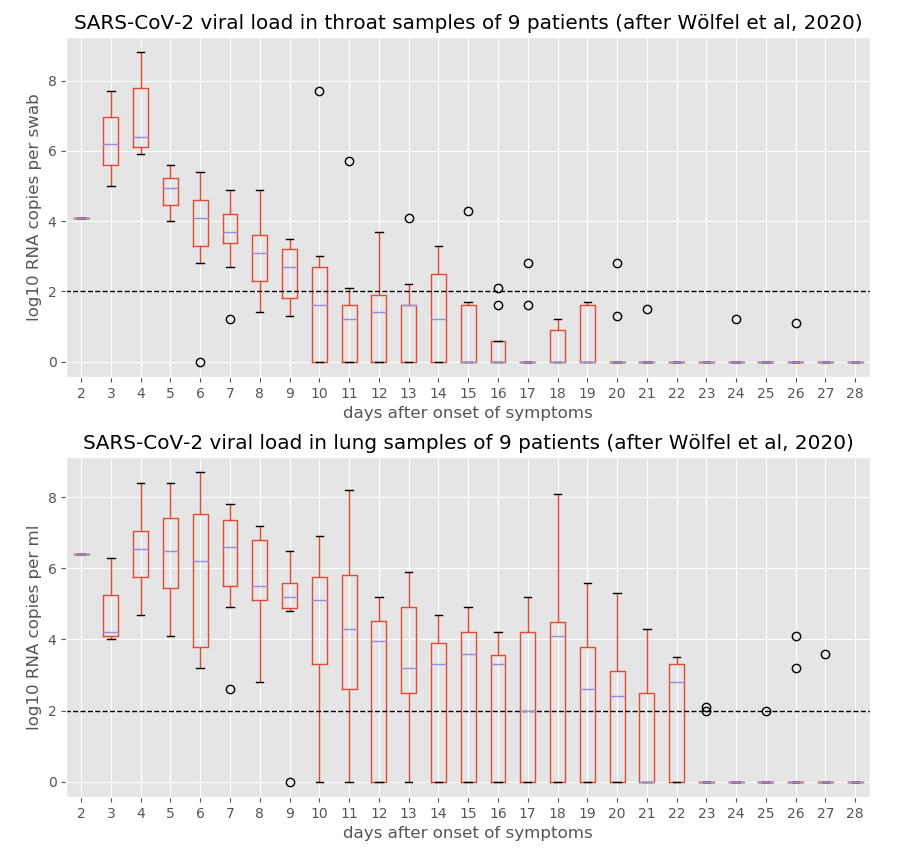 If you’re not used to reading these so-called box plots, don’t worry. The important thing is that the blue lines inside the boxes are the average values (more or less, actually the median), the boxes indicate the range of half the values, and the vertical “whiskers” indicate where the rest of the values are (apart from outliers, indicated by circles). The horizontal dotted line indicates the virus load below which detection is no longer very reliable (which is at 100 RNA-copies per sample, because the scale is actually logarithmic: 3 means 1000 RNA-copies, 4 is 10000 copies, etc.)

Although it’s not very clear, we can see that in most patients there is somewhat of a dip in the virus loads somewhere between days 10 and 13. However, around day 13-14, the virus loads tend to go up again, and with it the symptoms can come back. In the upper respiratory tract, this “relapse” is minimal and only lasts a day or two, but in the lower respiratory tract the virus load tends to fluctuate at a moderate level for another 9 days or so, before vanishing at day 23 (if you look at the individual cases, actually the lung virus load disappears somewhere between day 9 and day 27, depending on the case). The question is of course, what causes the rebound of virus load (and in my case, relapse of symptoms) that seems to occur roughly two weeks after the start of symptoms, and is it common?

Because I had quite a bit of time on my hands, recovering from the virus, I put together a survey on respiratory infection symptoms and context, and asked people to fill it out if they had experienced any symptoms. At the time of writing, 34 people entered information, and at least 12 of these reported a pattern of symptoms that is possibly more consistent with COVID-19 than with a common cold or flu. Obviously this is a very tiny data set, and the absence of independent virus testing makes it more anecdotal than scientific. But still it’s interesting to note that of the 12 possible COVID-candidates, 9 reported a relapse after experiencing 1-3 days without symptoms.

It seems that in COVID-19, the virus is initially cleared from the upper respiratory tract, generally within 10-12 days. But it is possible that subsequent reinfection of the throat and upper airways may occur by virions that are still present in the lungs. But even it that’s the case, it’s unclear why the virus load in the lungs seems to go up again as well. In any case, it seems that virus replication in the lungs generally does go on much longer than in the upper airways, which is probably why symptoms may persist for several weeks in some cases. But why does it persist for weeks in some people, while being more like a flu or even almost without symptoms in others? Of the 9 patients studied by Wölfel et al., most had fairly mild symptoms, but two (patients #7 and #10) reported symptoms of (mild) viral pneumonia (e.g. shortness of breath, late fever), and one (patient #16) was asymptomatic. Their virus loads are plotted below: 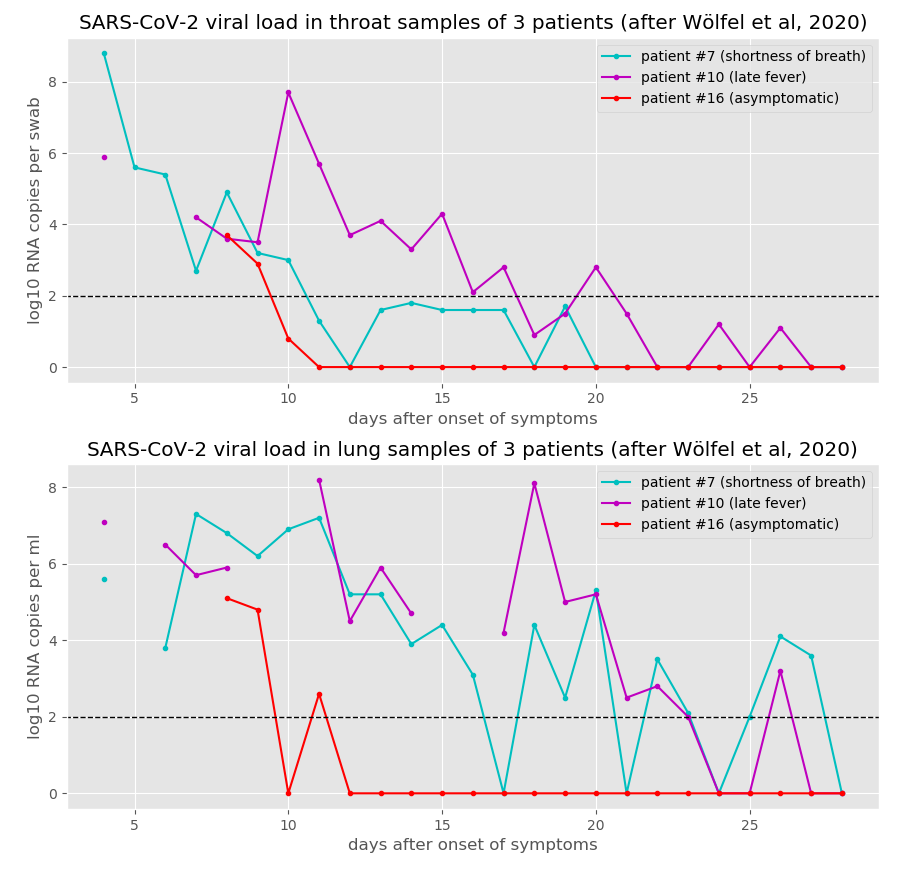 Unfortunately there is not much data for asymptomatic patient #16, but it seems that while his virus load was’t necessarily lower than that of other patients (this was also reported in another study), it decreased rapidly after day 9 and there was hardly any rebound. As for the two patients with symptoms of mild pneumonia, the virus load in their lungs peaked around day 11-12 and showed a second peak around day 18-20. Interestingly, this is fairly consistent with results reported for SARS. Peiris et al. (2003) reported a peak in virus load around day 10 for SARS-patients, and two peaks in the progression to ARDS, one at day 11 and one at day 20. However, even people with only relatively mild symptoms of COVID-19 (like myself) have reported that recovery can take several weeks, with symptoms flaring back up several times.

It is quite possible that the production of antibodies against the virus is responsible for the observed “dip” in virus loads but also for the recurrence and worsening of symptoms. The appearance of antibodies in the blood of COVID-19 patients was reported by Wölfel et al. to occur around 8 days after onset of symptoms (the range was day 5-14), and for SARS this was reported by Peiris et al. around day 20 (range 11-28). Antibodies are presumably responsible (at least in part) for the decrease in virus load after the initial peaks, and the clearing of symptoms. However, in some people they may also be responsible for the recurrence or the worsening of symptoms. Van de Veerdonk et al. report that pneumonia symptoms in hospitalised patients with COVID-19 tend to get worse around day 9. This may be caused by an effect known as antibody-dependent enhancement (ADE), which can almost certainly increase lung damage and possibly also increases virus infection. The enhancement of pneumonia symptoms is probably caused by the fact that the antibodies bind to virus particles in the lungs and attract immune cells. While this is a good thing in principle, it can also make the lung inflammation worse, and especially certain white blood cells may cause further damage to the lung tissue. Wan et al. also describe a mechanism by which certain types of antibodies may actually make it easier for coronaviruses to invade cells, at least for a while, which could be what causes the observed rebound of virus load in the lungs in some cases.

Return to the main text